Pretty Little Secrets: Interesting Stories from Inside the Studio

We’ve talked at length about the technical setup of our tiny little DIY studio in a previous post, and we’ve talked about how we wrote the songs that have now become an album. Our little DIY studio is now down the street from us, because just about the time we finished recording, we moved. So this month we’ll look back at how it went, recording at our old home. What was cool about it? What was not cool about it? And what kind of instruments did we use?

‘Pretty Little Secrets’ was recorded in the front rooms of our old house, between December 2018 and April 2019. We think the front rooms of our house were intended to be the “formal dining room” and “formal living room”, as the house was built in the 1960s. These rooms became the “control room” and “tracking room”, respectively. We saw this as a massive upgrade to the house, of course.

These rooms had the original 50+ year-old windows on them, which, while charming, do little to stop outside sounds from making their way inside. This became quite the issue when the T-38s and F-16s stationed at Ellington Field Joint Reserve Base decided it was time to put on mini-airshows over our house. And if the wind is blowing from the North (which is common between December and April), the aircraft approach to land from the South, putting our studio almost directly under that final approach path.

So there were a few times when we were recording a sensitive acoustic part, with microphones up really loud, headphones on, and so forth, and an F-16 decided to go all Top Gun over the house. Picture us throwing our headphones off as quickly as possible, and running outside to both witness the coolness that is an F-16, and to yell at it. We’re pretty sure the neighbors thought that we’d lost our damn minds by this time (if they hadn’t already reached that conclusion).

Sometime in January, one of the neighbors also decided to replace their entire driveway. Totally cool...but for the sound of one of those giant jackhammer machines, followed closely by some sort of steam-belching concrete-generating machine. It was impressively loud, but we elected not to feature it on the album. Instead of trying to fight the noise, we took a couple days off from recording and John decided to ride his old, only-one-brake-works bike down the street and shoot a short video of this action (https://www.facebook.com/griftersandshills/videos/1939045119736877/). Might as well have a good time with it.

Challenges aside, there were a lot of benefits to recording in our old home. Not beholden to commercial studio schedules and hourly rates, we had the freedom to work on parts of songs until they were exactly right. This meant everything, because so often, little nuances (such as the tonal quality of an echo on Rebecca’s vocal that only shows up once in a song) could become the focus of a night. Of course, this could work against us…when is it good enough? (No idea.) When is it done? (Never - ask any artist.) So we imposed a deadline on ourselves to give us a line in the sand where we had to be done, come hell or high water. That helped a lot, though even now, printed discs in hand, done as done can get, we still get ideas about how we could tweak things and make them just a little better.

Another integral part of recording in our home is our little zoo of pets. We have two cats, Newman (aka Burt) and Beetle (aka Ball). These two have the sense to flee the room any time we even reach for a guitar, much less crank up an amp. The dogs, Omie (aka Homer) and most recently, Bindi (aka Ben), were a different story. Although Omie is fully terrified of thunderstorms and booming sounds outside, but the tremendously loud sounds of recording were totally cool by her; she flat out insisted on being part of things in the studio. During many of the guitar parts John was cutting, Omie hung out, frequently sleeping in the studio while the amps were up at full tilt. She insisted on being right where John liked to sit while cutting lead guitar - laying up against his chair as he worked away trying to get things just right. 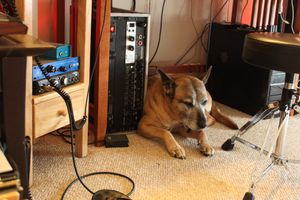 Bindi joined us at the tail end (see what we did there?) of the recording process, and was similarly insistent on being part of the creation of this album. She was a little wary of the amplifiers however, turning her head comically when things got loud. The song that really got her attention was ‘Left Right Left’, as the lead guitar parts were particularly difficult to get down. We think she finally got sick of hearing the song, and eventually left the studio after a marathon session to go pass out in another room. The dogs always have it right. We, unfortunately, were not able to follow suit.

Another defining moment for the recording of ‘Pretty Little Secrets’ was the government shutdown in late December of 2018. John has a day job working in video production at the Johnson Space Center, and the shutdown led to him having some unexpected days off. Against the backdrop of income uncertainty, in the cold of early January, John found a few extra days alone in the studio. It was in these days that a couple of songs started to mature in the studio. This was particularly true for “Music Man”. But it found its feet during the tumult, and has become one of the signature racks of the album.

We explored a number of instruments during the recording and production of the album, ever in search of that fire that comes out at live shows. The initial tracking sessions, and most of the base-layer rhythm guitar work, came from a Godin Kingpin Archtop (the early model, with only one pickup), an Ibanez Mikro bass, and a homemade stomp board. As we worked into the production phases of recording, an army of instruments were called in.

A 20” Mapex kick drum and a 14” Mapex snare found their voice throughout the album. The kick drum, of course, was the old drum we used to haul around some years ago. A hand drum given to us by a street vendor in Galveston, a couple of old cymbals, and two different tambourines rounded out the percussion for the record.

For basses, Rebecca used her Ibanez Mikro throughout. She gets her tone on a VT Bass DI, so her rig stays simple and true. John played a five-string G&L bass on “Hell & High Water”, and “Disappear” featured our unnamed half-size upright.

Four main guitars were used on the album. The Godin Kingpin archtop was the primary rhythm instrument. A Gibson Les Paul DC Standard, a Fender Jaguar, a Gretsch Streamliner, a Texas Smoke Strings cigar box, and a DB Customs cigar box handled all of the electric lead and rhythm work. A Danelectro Baritone guitar courtesy of our friends Sam and Kim Barker also found its way into several of the songs, providing something of a signature sound for the album. Finally, a 20-year-old Gibson G-400 was used on the big down-tuned riffs on “Highway Ride”. (Fun G&S trivia: This G-400 was Rebecca’s very first guitar that she bought in highschool when she decided that being a rockstar would be super cool.) 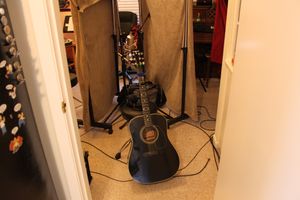 There were also a couple of acoustic instruments on the record. The first was a Lotus acoustic guitar, loaned to us by our good friend John Streeter (creator of our wicked album art). While trying to find the right guitar for “Last Leaf has Fallen”, we tried several “nice” guitars, Martins and the like, but they all sounded too good. This Lotus, though it plays with all the ease of an average 2x4, ended up being perfect! The other acoustic instrument--a handmade gourd banjo from our friend Drew Nelson) is featured in “Music Man”. We tuned it in open-Bb minor, and played in a modified fingerstyle. This was a very challenging instrument to record, but the haunting drone of the strings made the perfect opening lines of this song. A handful of harmonicas, kazoos, and (at the very last minute) a theremin, as well as a good dose of creativity rounded out the noise-makers on the album.

All in all, it was a very thorough, heartfelt, at times exhausting, at times exhilarating experience to record, engineer, and produce this album. We’ve said it before and we’ll say it again: this album is 100% true to who we are as artists and as humans. It is an extension of who we are and how we do things, and we are infinitely grateful to you for sharing this experience with us.